Birdwatching In The Baja California Desert

After a very quiet and chilled time over Christmas and New Year, the start of 2020 suddenly got busy with work. Like, really busy.

I hit 130 lessons on iTalki, Mrs Wench 100 hours on Cambly. On top of that I'd been working on building (or 'dicking about with' 😉) my new teaching site, OpenArgot.

Our apartment is great - 10 minutes from the ocean, well-fitted out - but it's set back like many Mexican homes. This must be a real boon in the summer, as it would be very cool. In the winter, though, it can be kinda gloomy and a slightly depressing.

We needed to get out of the house.

We'd spotted this trip on Airbnb experiences a couple of weeks back. I was very much looking forward to it. Ernesto arranged to pick us up at our apartment at 8am; he'd arranged a driver, Juan, as we didn't have transport of our own.

Out Into the Desert

The site we were heading to is about 8 miles out of town, on some Federal land surrounding a dam and reservoir:

We were soon driving out on dead-straight route 286, with little but cactus and mountains in the background. Lovely. I started to unwind despite the early start.

Soon enough we turned off the road, onto a dirt track, which ended up in a large gate with a very friendly welcoming sign:

Luckily Ernesto was friends with the ranchers, so we entered without any major problem. Well, apart from the main gate being locked, because they'd lost the key; the owner's wife was in La Paz getting a new one cut.

So we had to wriggle under the fence. So far, so Mexico 😀

Soon we were wandering along a lovely track, cut with rivulets, in a fabulous location:

There's something really special about the Baja desert. I suppose that growing up in Scotland, and living 25 years in London, it's not an environment I've a lot of experience with. I had been out once before here, but it was only short walk from the malecón.

The nearest I came was in Egypt in 2019. But while speeding through the Sinai in a car driven by a Bedouin is undoubtedly very cool, it's not really spending time in the desert. Jesus may have spent 40 days and 40 nights there; we spent a few hours admiring the scenery, interspersed between Army checkpoints.

Christ also didn't have to put up with the horrific sight of literally thousands of plastic bags; pretty much every shrub, every rock, was festooned with non-biodegradable detritus blown across the desert by the wind.

This place feels more untouched. Yes, there are dirt roads, and yes, there's a man-made lake and dam in the middle. But there's still an unspoilt feeling. It feels like a place where the trees, the land and the animals come first, and people second.

And yes - trees. Here near Presa de La Buena Mujer, we are in a forest of sorts. Ernesto explained that because Baja separated from the mainland of Mexico a few million years ago, there is a unique mix of flora here. I guess also that the latitude helps - being subtropical it's in a kind of Goldilocks region for trees which don't like it too hot or too cold.

OK, so it's time to fess up: although I love animals of all sorts, and I do think birds are interesting and attractive, I'm not actually a birdwatcher. I prefer my animals small, furry and cute! But I figured the chance to see some wildlife out in the desert, with a knowledgeable guide, was worthwhile.

Ernesto came prepared with printouts of the various birds we might encounter, as well as a couple of birding apps. This is a man who knows his stuff!

Over the course of the morning, here's a list of the birds we saw or heard:

32 in all! And some photos. Note that these are all Ernesto's photos and must not be used without his permission:

Down By The Reservoir

We carried on walking down the track towards the water's edge.

🎼Ridin' through the desert, on a horse with no name...

The reservoir was formed when the dam was built in the 1980s, to protect La Paz from flooding. The habitat it provides is one of the reasons this area is so rich in wildlife. As well as the hawks, eagles and vultures common to the southern Baja peninsula, there were ducks, grebes, herons and egrets.

We passed the ranch where the residents live. Goats, chickens and dogs keep the horses and humans company.

And on a little further, cresting a rise, we were finally able to see the lake from above.

Ernesto does take people out to a few different places. He explained that for general tourists, places like this seem to work best. For serious birders, though, he has a few other spots which focus more on the birds and less on the landscape.

We then walked on round to the dam itself. It's a brutally industrial, effective construction; as with many dams, however, it almost seems to belong in the landscape.

After posing for a few snaps on the top, we clambered down over a load of rocks to the bottom on the downstream side. Here, we were promised, were lots of hummingbirds.

Half-way down the dry side of the dam

Sure enough, at the bottom we found a wonderfully secluded little spot. Boulders littered the surface, so you had to watch your step, but it was quiet and peaceful. Hawks and eagles soared above in the heat; one seemed particularly interested in us, a few times swooping down only a few metres about our heads.

It was exactly like the old Westerns with the shimmering heat haze, the cowboy staggering around parched, out of water, and the vultures circling 😀

There are a number of shrubby bushes at the bottom, of which the hummingbirds are apparently very fond. Sure enough, if you sit still enough for long enough, the little guys come and pay a visit:

I remarked to Ernesto that they moved amazingly fast for such small animals. "Yes", he replied, "And they are very aggressive."

I laughed aloud at the idea of being attacked by something that weighs about 4 grammes.

"No, seriously. If their nest is threatened, they will attack. Even hawks. In fact the Aztec war god, Huitzilopochtli, is named after the hummingbird: 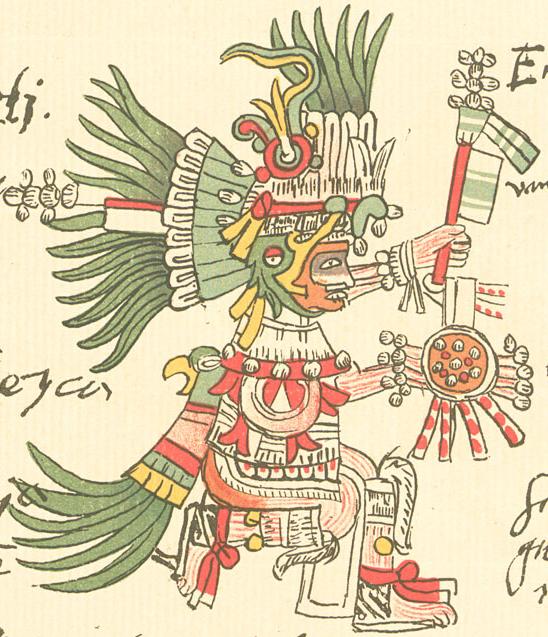 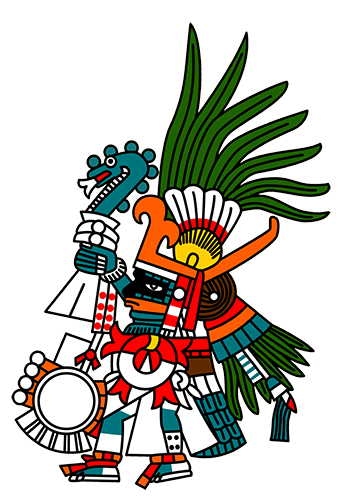 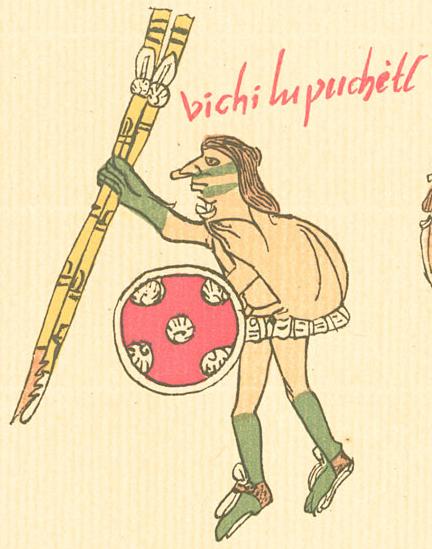 If the Aztecs thought those birds were crazy enough to name their War God after them, that's good enough for me... (Images PD from Wiki.)

After 45 minutes or so enjoying the peace, scenery and... Devil Birds, we climbed back up top and back to the entrance. After negotiating another fence (still no key for the main gate), we waited a few minutes for Juan to return and drive us back to La Paz. Mrs Wench took the opportunity to stop off for a taco, and I went home!

We took the trip with Ernesto, booked via his Airbnb experience 'Wildlife and Birdwatching in La Paz." We paid just under £30 each for transport there and back, study materials, various apps including one which generates bird sounds, all supported by Ernesto's expert experience.

The trip lasted for about 4 hours all up.

A nice and slightly different way to spend a day outside the city. Recommended.