Open top buses are a great way to get a feel for a city, see some of the top attractions, and start to programme your head with the layout of a place. I've taken them in New York, Barcelona and other places; although to our shame, in a combined 45 years of living in London, neither Mrs Wench nor I have done a London Bus Tour 😊

A city like Guadalajara cries out for an open top bus ride. It was a glorious 26°C with clear blue skies, and we'd been looking forward to digging ourselves out from behind the laptops and being tourists.

After a bit of research we settled on the Tapatio Tour company. They have a tiny office on the north-west corner of Rotonda de los Jaliscienses Ilustres, right next to the Cathedral.

The Rotonda garden and monument

The Rotonda is a monument to famous denizens of Jalisco State - the majority of them from Guadalajara. Designed by Mexican architect Vicente Mendiola, it opened in 1954 and commemorates artists, scientists, literature and civic heroes.

Some things never seem to change.

The Tapatio Tour bus picks up outside the cathedral, on the other side of the Rotonda to the ticket booth.

The Cathedral is directly behind the camera; the ticket booth is almost straight ahead behind the bus, round to the right

The Tapatio Tour Sets Off

The bus was scheduled to pick up at 3pm. Given that much of the centro was closed because of the "GDL Luz 2020" celebrations for the 478th anniversary of the city's founding, I wasn't surprised to see it trundle up 20 minutes late. Even when traffic isn't a problem, punctuality is not Mexico's major export .

But we hopped on, climbed upstairs, and despite Mrs Wench's objections decided to sit a few rows back from the front.

This was a mistake for two reasons. First of all, despite my constant exhortations to readers to make sure they wear a hat... I forgot my hat. This led to me spending over an hour and a half in the sun. While I had applied sunscreen to my, uhm, thinning pate, in 26°C in the tropics, you catch the heat. I didn't burn, but did get distinctly woozy and grumpy by the end.

Tree or triffid? You decide

See those branches? We'd been driving for about 3 minutes when something whacked me right across the face. I was too startled to react much, so when it happened again about 2 seconds later I hadn't a clue what was going on.

What Tapatio Tour neglect to explain is that they're not manicured to take consideration of idiot tourists, sitting one story up in the air with nothing to protect them. They hit the front of the bus, which sets them moving, then ping back and forward between the vertical rails on the side.

Later in the tour there was another problem with ones hanging down over the deck, and on one occasion I was hit by a cable dangling between two electricity poles.

On the basis that I'm here complaining about it, I'm assuming it wasn't live.

Getting Out Of Centro

It took a good 15-20 minutes to negotiate our way out of the centre of the city.

Traffic in Guadalajara is bad at the best of times; this was late afternoon on a Friday; rush hour plus closures isn't the ideal combination.

We did see a few attractions on the way out, however.

As we seemed to be going nowhere in a hurry. I decided this was a good time to check in!

We did pick up a little and made some progress, driving out along La Colonia Americana. This neighbourhood is one of the nicer parts of town, home to loads of expats. It used to have loads of French style houses along either side; some have gone, some are still in use as houses, some have been converted into businesses.

Plenty of bars, restaurants, gyms and things to do here. (Also more traffic).

We proceeded along and were treated to a view of the "famous Centro Magno". It's a giant shopping mall (hence the elephant outside - geddit?) and contains a large number of cinema screens.

I'm not a fan of shopping centres so I can't say much more about it, but we'll remember it as "that place with the elephant outside" 👍🏻

[Update: I've since been it the mall. It's pleasant and well laid-out, but I wouldn't say it's anything to write home about. The atrium is nice and it's 5 stories high. You can buy things! ]

A little further on, and the traffic is starting to flow more freely. We roll up and under the Arcos de Guadalajara. Built by architect Aurelio Aceves, it opened in 1944 to celebrate the 400th anniversary of the founding of the city. It's a pair of neoclassical style triumphal arches, 8m thick and 14m high:

"A pleasant stay is a guarantee of return"

"Guadalajara capital of the Kingdom of Nueva Galicia founded in this place on February 14, 1542"

Little could have the founders anticipated quite how the city would blossom.

A block or two later is the Minerva Roundabout. Built in 1956 by the architect Julio de la Peña, the pool is 74m in diameter and the statue of Minerva (Athena in the Greek pantheon) is 8m tall.

Fun fact: as soon as it was unveiled, it faced criticism that the face wasn't especially "Minervan". Some suggested it wasn't even particularly feminine.

Some scoundrels even went so far as to claim it bore a striking resemblance to the sculptor - Pedro Medina Guzmán.

Guzmán was hauled in and challenged; the city fathers demanded he remodel the face of the statue to look more "appropriate".

He flatly refused, and no further action was taken.

Just goes to show there's nothing new under the sun. I mean... it's not as if Guzmán was the first, or the last artist to be lampooned and ridiculed for their work...

Minerva is now a focal point for celebrations such as sporting or political victories - a sort of Tapatio Trafalgar Square.

Any way you look at it, it's a lovely spot. It's particularly well thought of by the local football team, Club Deportivo Guadalajara.

We passed a few more notable sites; a bronze of a stampeding herd of horses, a 1km long suspension bridge, and the Guadalajara Expo centre. It's pretty hard to see or get photos from the top of a moving bus, sadly.

We stopped (for traffic - naturally) at a roundabout, where we came across the wonderful site of the Arcos del Tercer Milenio, the Arch of the Millenium. 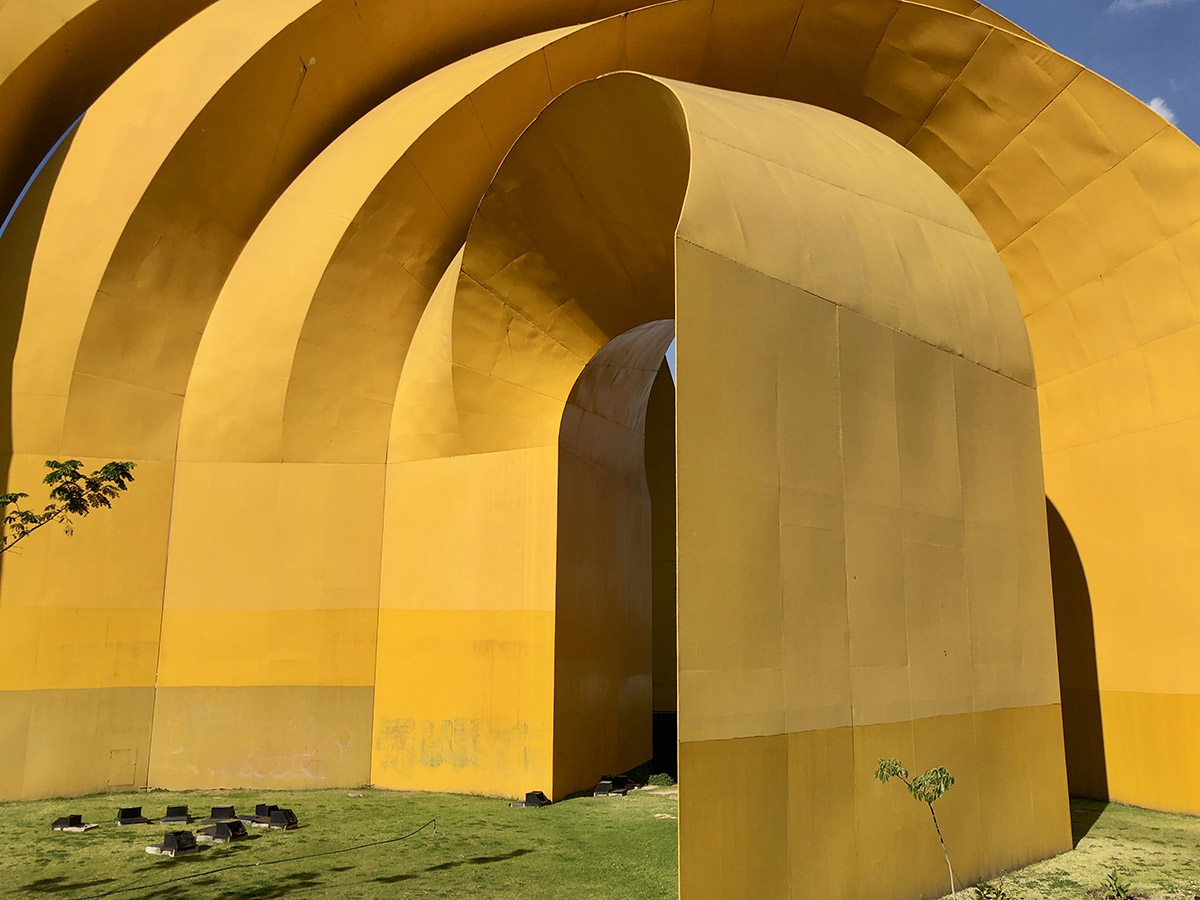 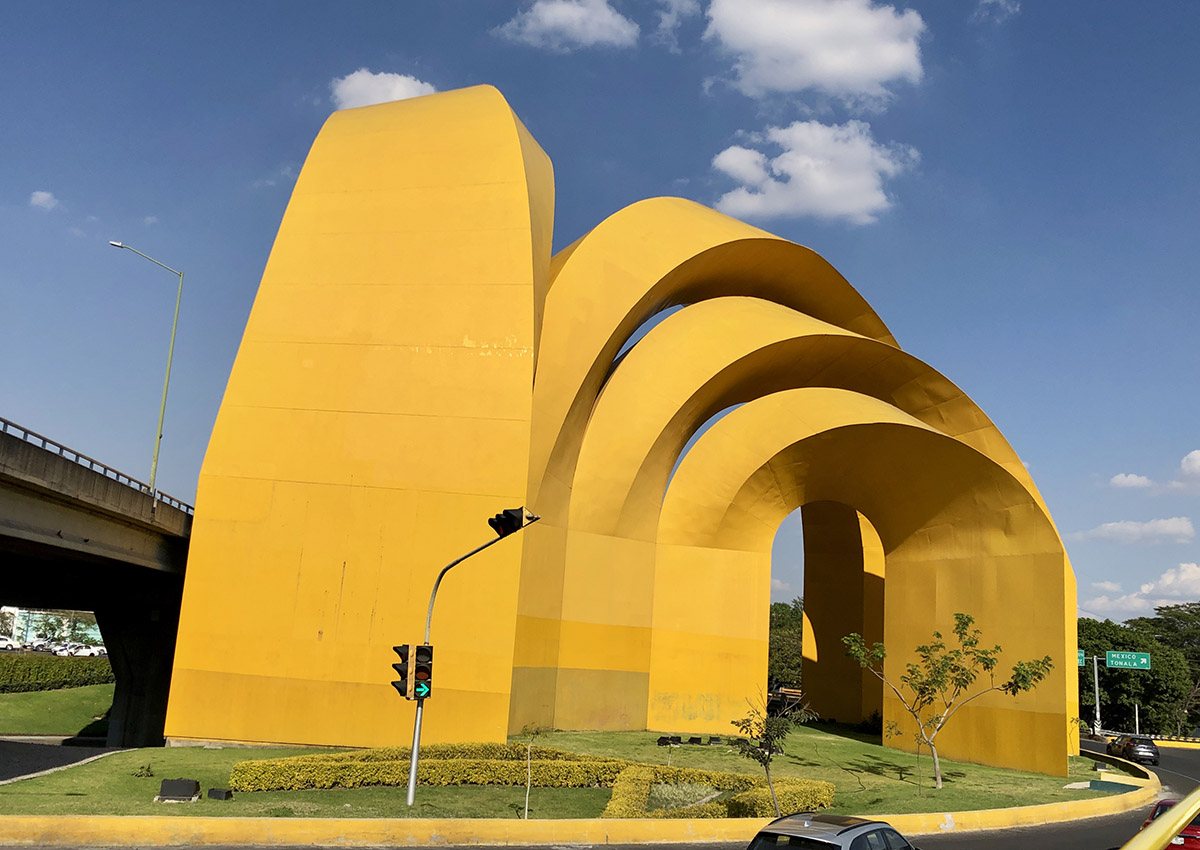 Designed by Enrique Carbajal González, it's 52m high and weighs around 1,500 tonnes. It was commissioned to mark the millenium in 2000, and it's not yet complete. Delays and problems in financing mean that to date, only 4 of the 6 arches in the original design have been built.

Again, some problems seem to be universal.

We passed by Temple Santa Filomena, with its beautiful tiled cupolas:

Before long, we were back turning into the centro and passing the Catedral and the Plaza Guadalajara,

Slightly sun-baked, a bit tired and thirsty, we got off, thanked the driver, and went to get a drink.

Safely back where we started at the Cathedral

The Tapatio Tour of Guadalajara

Tapatio Tour offers four different tours - we did Guadalajara. They also do runs to Tlaquepaque, Zapopan and Tonalá. Obviously I can't speak to any of these tours.

If you decide to take one of these tours, here's some free advice!

1. The headphones are crap. They operate in Spanish and English only. If you need English commentary, bring your own noise-cancelling wired headphones. The ones provided (for free) are cheap-as-chips tourist tat, useless over the noise of the speakers, traffic, and oh my god that bloody mariachi music.

2. Be careful if you sit on the outside seats. As noted, branches along the route have a nasty tendency to whip you in the face. I know I'm usually pretty flippant in this blog, but seriously for a moment - one cracked right over my RayBans. It could easily have taken an eye out 😳

3. Don't stand up. You don't realise quite how much cabling, signage and other assorted crap runs 5m off the ground until you're 1m underneath it. If you stand up you run a real risk of garroting yourself on cables, or being concussed by a traffic sign.

(Alternatively, if you manage to get to the front of the queue, you can sit in the front row of seats. They're covered and offer protection from trees, cables and the sun).

Tapatio Tour do not offer the greatest or most interesting trip you're going to take. However, you get the Driving Miss Daisy experience for about an hour and a half, get a feel for different parts of the city, and do spot some of the major districts and tourist attractions. There are worse ways to tour Guadalajara.

You also spend a lot of time sitting at traffic lights or in stationary traffic. I know we picked a bad day, but I'm pretty sure it wouldn't be much better any other.

However: for MX$90 / UK£3.70 it's great value for money, and a nice way to pass a couple of hours if you're looking for things to do in Guadalajara.

Oh, and I wasn't kidding about the music. You will be subjected to 90 minutes of either sheer sonic torment, or unalloyed Mexican folk heroism, depending on your view of Mariachi.

Not so much Tapatio Tour, as Tapatio Tears. You can guess which camp I fall into 😉