You can get to Todos Santos in an hour by car from swanky-yet-skanky Cabo San Lucas - and it shows. We’d heard it was a sleepy, arty, Pacific Ocean surfer town with a significant population originating from north of the border, so we thought it would be a bit pricey but quaint and crafty. We were, at least, partly right...

A quick search for accommodation on the usual websites in early January revealed a night in a private space, even a hostel, started around UK£50/US$65. We decided to stick to one night. In the end, later in the month, there were better value hotel options. We went for the stylish mid-range Villa Bugambilias, partly because it appeared to be a short walk to the centre of town. (More of that later.)

If you’re a surfer, a hiker, an art aficionado, or you’re into yoga and poetry retreats, this could be the place for you. Or if you have the will and wallet for a luxury hotel stay, and you like quaint, historical towns. There are just a few things you need to know...

Public Transport - Or Not!

We decided - regrettably - there there was no point in renting one for a short visit, as buses from La Paz are quick, regular, cost MX$160 per leg and take about 90 minutes. The trip from Los Cabos is even easier, and mini buses and taxis also regularly ply this route. But we had been spoilt by our experiences of La Paz and Cabo San Lucas.

In Todos Santos there is no public transport, no friendly Playa Bus and no Uber. There's no taxi office, or none that we could find. There may be taxis waiting by the bus station - or there may not. You seem to need a secret phone number - one that you can actually get through to.

Todos Santos is sleepy, sure, but it's a little spread out. It's not easy walking distance from one end to the other. Rent a car. Life's too short.

The town started as a mission established by the Jesuits in 1723, and with its location between the Sierra de la Laguna mountains and the Pacific Ocean, fresh water and fertile land, it became a successful settlement. By the late 19th century it had grown into a significant producer of sugarcane. The area has a lush feel not enjoyed elsewhere in the Baja desert, and the view from the square in front of the Iglesia de Nuestra Señora de La Paz shows a wide swathe of palm trees stretching far away to the ocean glistening in the distance.

You can walk to the ocean but it’s not a gentle or pleasant stroll, even when it’s not blisteringly hot.

Todos Santos is one of those places people will say is spoiled by tourism, but will probably become more user-friendly. If you visit it now, you will have a much better experience if you can drive out to the various beaches, hiking spots in the mountains or cliffs, and potentially, from your accommodation into town.

Our hotel was a short 20 minute walk - on the map. But the road was dusty, dark and hilly enough that we didn’t fancy heading into town, knowing we might also have to make the return hike.

Arts and Crafts, People - And Those Prices!

Todos Santos has a really interesting mix of people. The non-Mexicans who have settled here are of the surfer, arty and boho type. They seem to happily mix with kind and peaceful locals, giving the place a really welcoming atmosphere.

The second thing you need to know is that Todos Santos is not "a bit pricey". It is actually quite expensive. Everything on the Baja peninsula costs more than on the mainland, for obvious logistical reasons; but food and drink here seems to cost at least as much as in Cabo, and all the jewellery and craft shops and stalls we checked out were charging crazy prices.

There is some really lovely craft, jewelry and art to be had in Todos Santos. But it doesn't come cheap

While there are some genuine artists and craftspeople, they do seem to be slowly getting drowned out by the sellers of mass-produced tourist tat, which we thought was a shame, and not at all what we were expecting. But when you consider the easy striking distance of flights to destinations in the USA and Canada, and the number of well-to-do visitors, this is perhaps less of a surprise.

Sadly, though, the influx of mostly gringos has led to prices rocketing, and we were told by one Mexican that if you didn’t have a family home to live in, you couldn’t live there, as a small flat without kitchen is now $500 a month. And that’s US dollars, which almost everything here is priced in.

Don’t worry though. You can do Todos Santos without bankrupting yourself. There are various camping, eco-house and hostel options located near Todos Santos’ beautiful beaches.

In town on a budget, you can find a row of taco stands opposite the Banorte bank on Manuel Márquez de León. We also saw a fish taco stand called Sara’s next to the park opposite the bus station, which seemed well-attended by locals.

A Note on ATMs in Todos Santos

Warning: There are 4 ATMs in the Banorte bank on Márquez de León. A sign on the door announces that they don't dispense cash on foreign accounts. We tried with 3 different UK cards, and sure enough, they didn't cough up.

Next to the bus office (I can't call it a "station"!) on Heroico Colegio Militar is a hole-in-the-wall ATM. It was out of order when we visited. (Incidentally, if you need one the Todos Santos vape shop is right next door.)

There's a BBVA/Bancomer on Calle Benito Juárez. This had 3 ATMs. Two of them rejected our cards; one did, finally, accept.

The moral is - if you're visiting Todos Santos, make sure you bring enough cash! There may be other ATMs that we missed, but spending 45 minutes trying to find the money for a coffee was a bit irritating!

Back To The Quaintness, And Things To Do

This is a genuinely pretty and charming town, with the remains of its 19th Century mills and haciendas converted into homes, hotels, shops and restaurants. 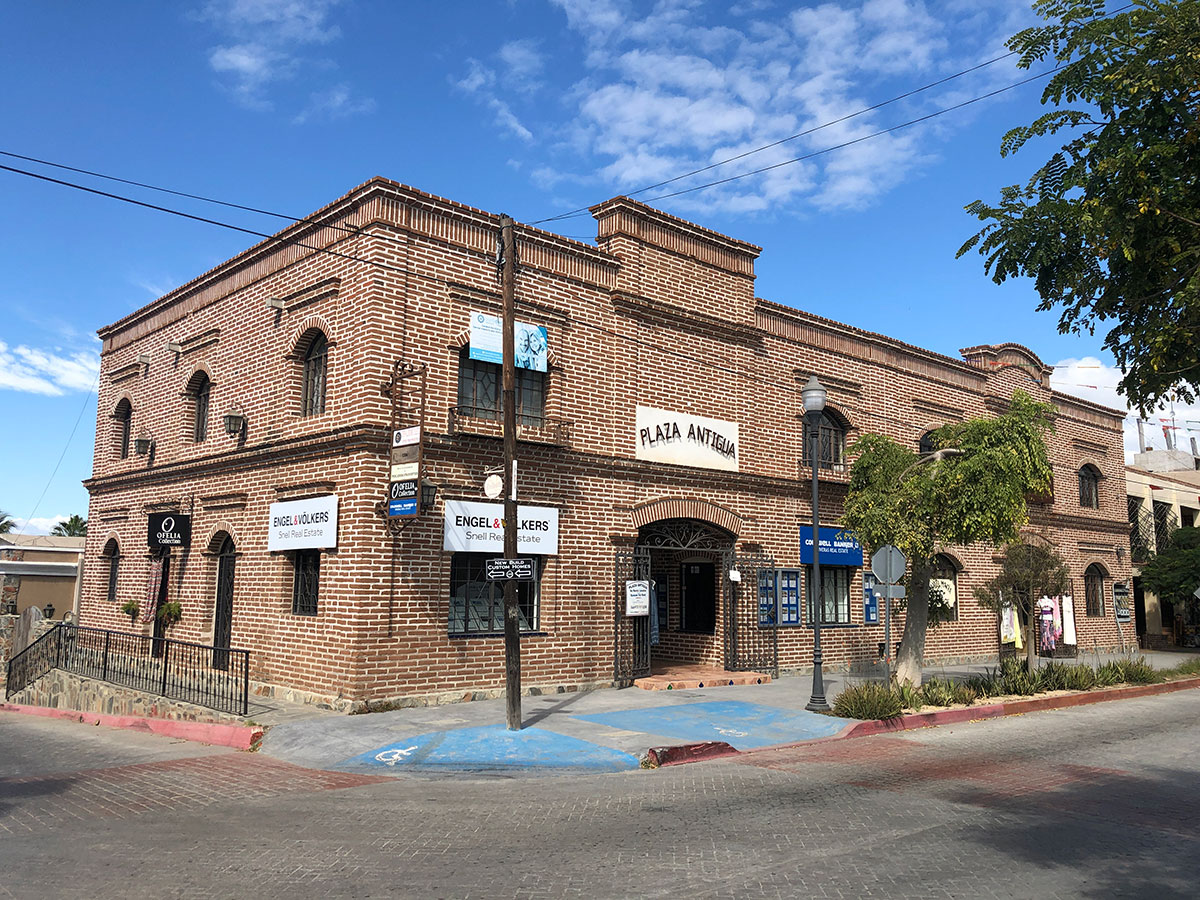 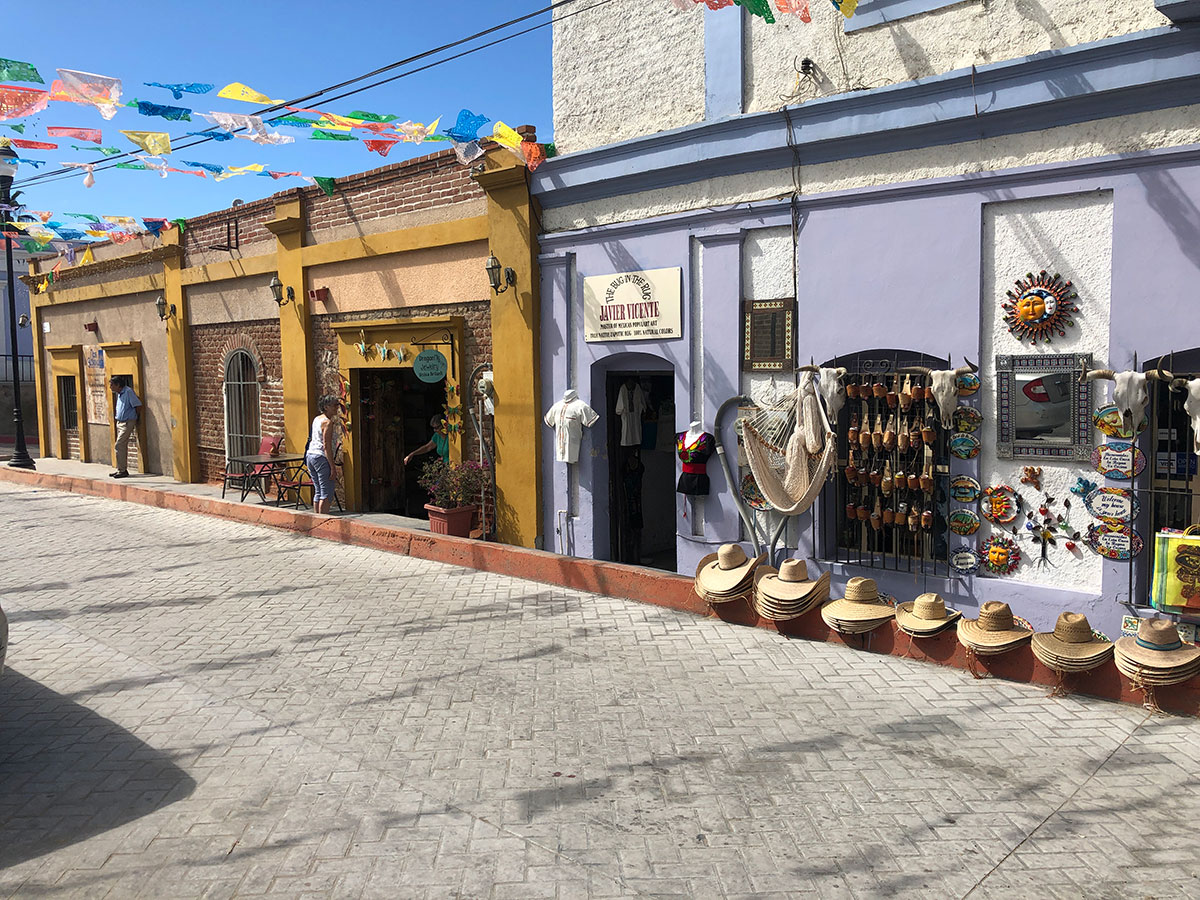 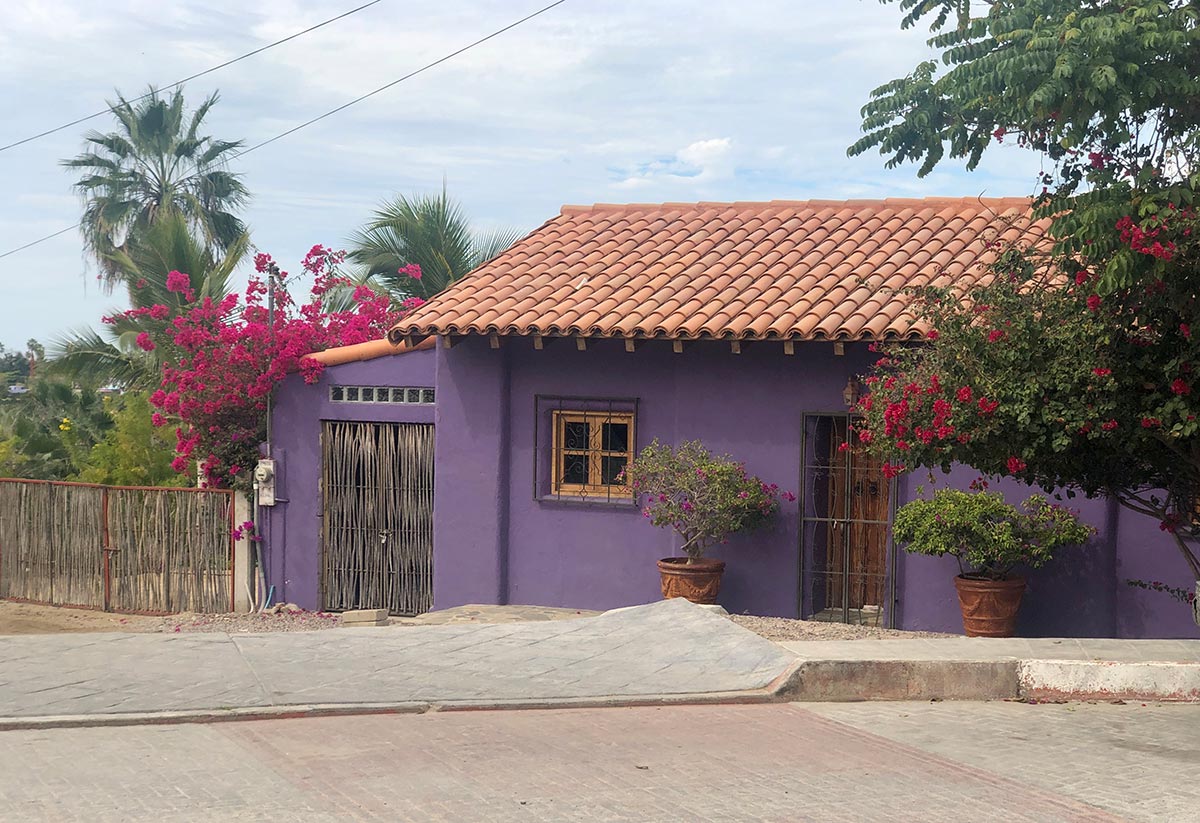 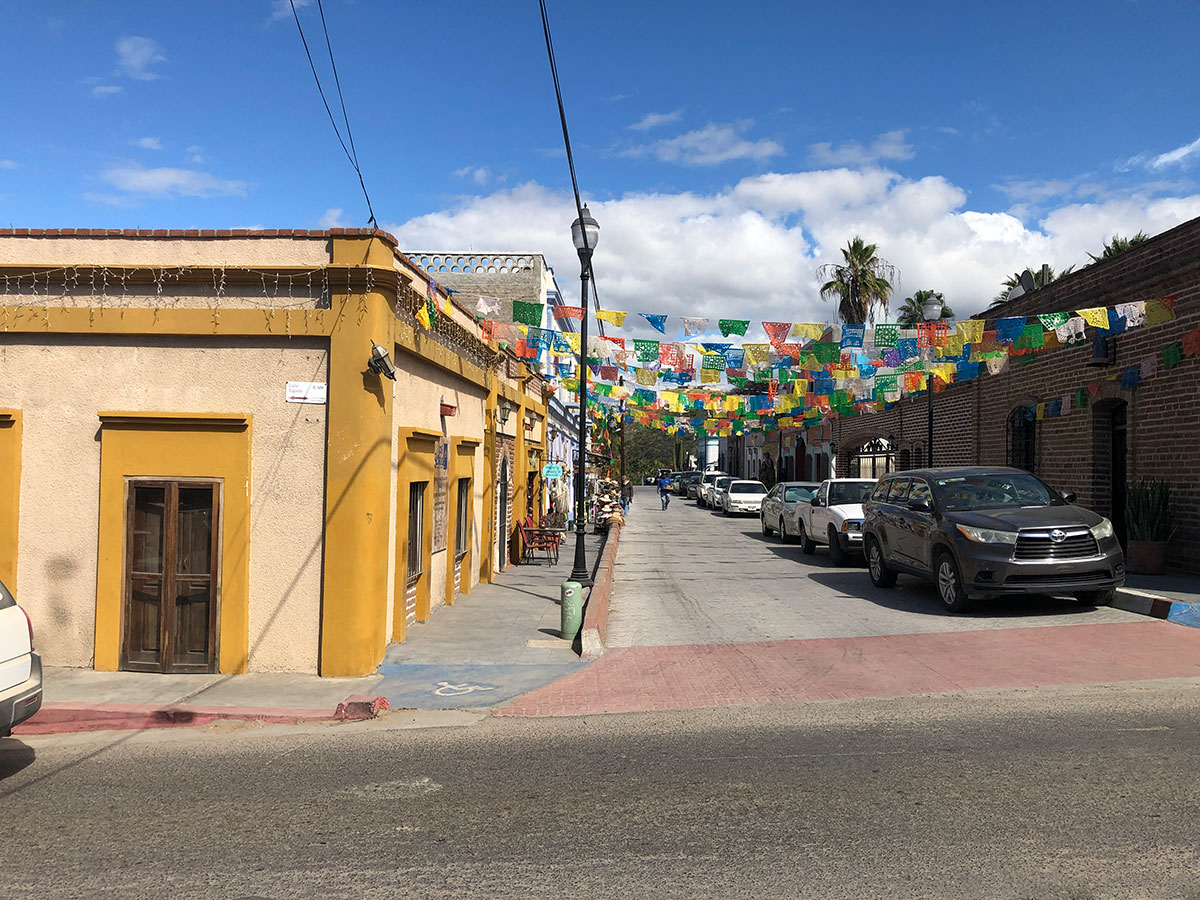 One fine example is La Esquina, which hosts regular Latin dance lessons and social dance on Friday nights, and has a notice board stuffed with community events and offerings. It sells organic desert soap and coffee at the cash desk, and offers a chilled vibe excellently walking a fine line between all-out hippie and laid-back luxury 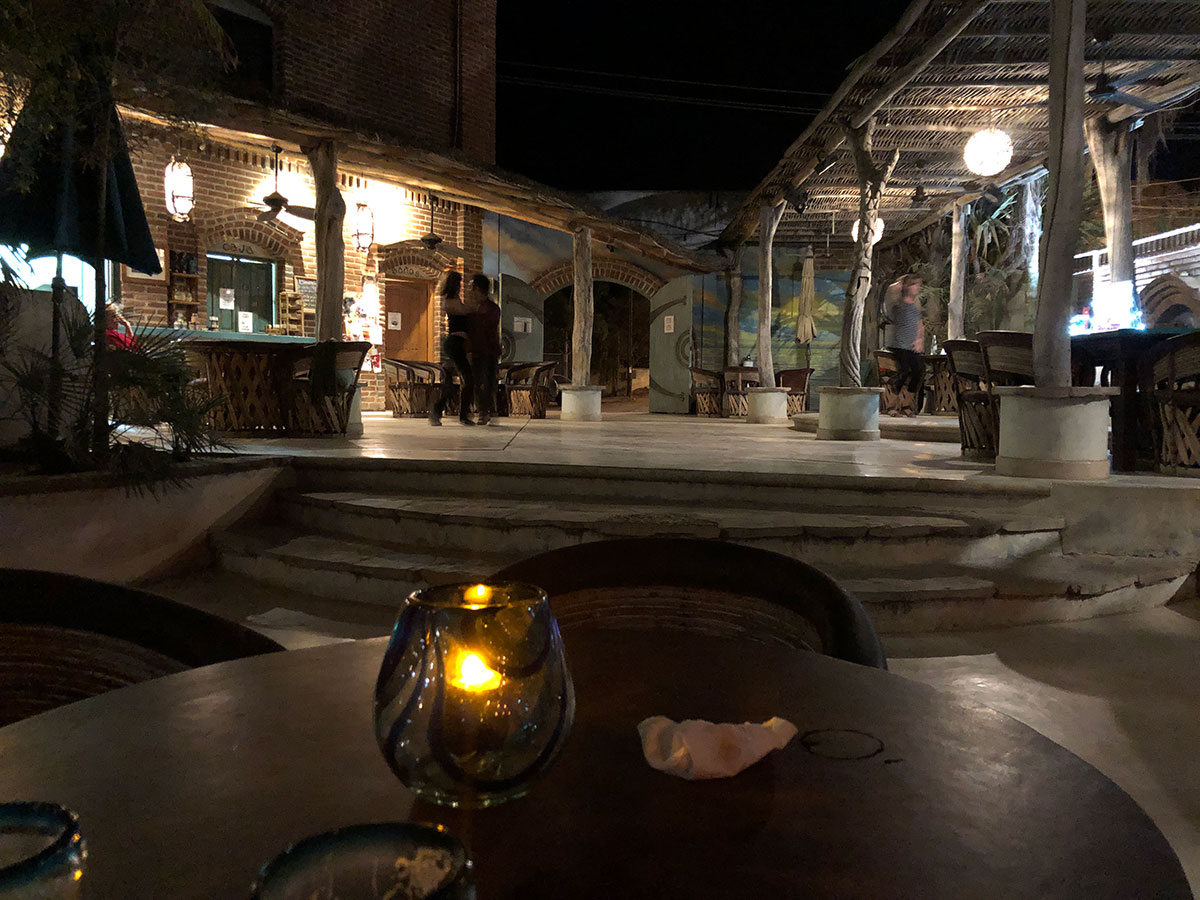 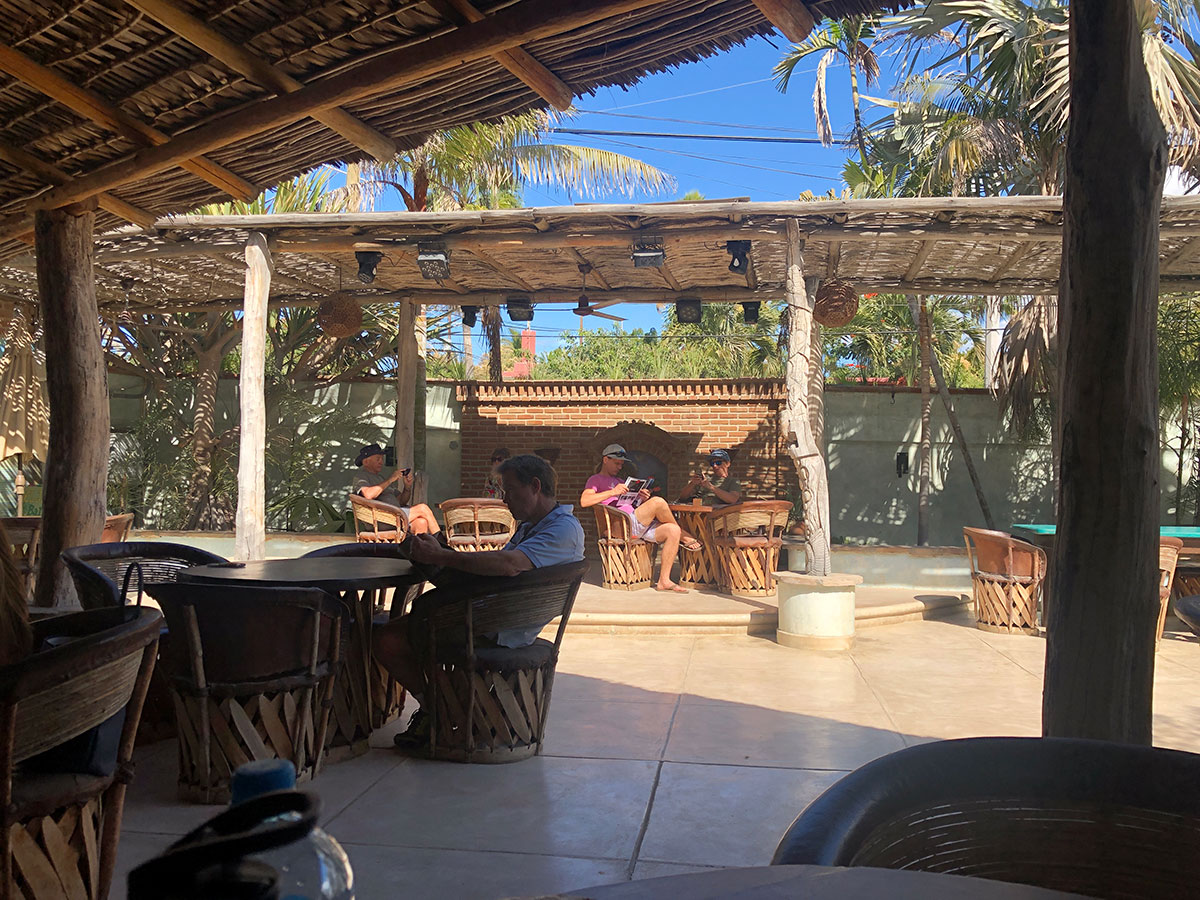 On Sunday morning we joined many others for desayuno - or brunch, if you want to be fancy - where I had a gigantic club sandwich and papas fritas (for an extra MX$30) which Hungover Me thought was a fine idea. Trust me, you don’t need the chips.

The Grumpy Jock practically groaned over his blueberry pancakes complete with fresh fruit and maple syrup.

Grumpy Jock actually Instagrammed his breakfast. He never does that!

There was great people watching too. I could have stayed there all day.

You can browse galleries and craft shops all morning before settling down for an overpriced margarita in the famously-named Hotel California. They claimed to have the name before the Eagles song was written, but ended up in court after allegedly capitalising on the association, with the parties eventually settling.

The place also has a street-facing ice cream parlour and giant gift shop, which sells tourist tat and a wall of various Hotel California t-shirt designs. It is staffed by shark-like vendors who literally follow you around.

On the city square is an art moderne cine-theatre - Teatro Manuel Márquez de León - built in 1944, which is still used for performance and which is open for a peek inside Mon-Fri, 8am - 3pm. The town holds an annual Cinema Festival every March.

We had heard about Tortugueros Las Playitas in La Paz, and this was top of our to-do list. The volunteers release the hatchlings every day, or almost every day, between about December and early March. Members of the public are welcome to attend each evening and help let them go.

We followed them on Facebook and sent them a message the day before. We didn't get a reply; you don’t really know for sure if there will be a release until you turn up.

After a bit of nail-biting about the lack of Uber (see above), and the horror of feeling ripped off by a MX$200 fare for the 10-minute drive to the beach, we arrived just before the appointed time of 5pm to find a few people sitting staring at the waves which were, it has to be fair, mesmerising,

So: exactly what's the deal with the turtles?

Fun fact: Todos Santos lies exactly on the Tropic of Cancer. Formally that's the northern extent of the tropics. Adult turtles don't care about that; they just lay their eggs all the way along the pristine Las Playitas beaches to the west of the town.

The problem is that this far north isn't quite as warm as further south. The turtles lay their eggs in the sand, and when the winter comes round, some of them don't develop; the eggs fail to hatch.

So the people at Tortugueros Las Playitas - all volunteers - patrol the beaches at night to mark the egg caches. They then dig them up and rebury them in a hothouse - literally a plastic 'greenhouse' on the beach - to keep the temperature up.

When the eggs hatch out, they collect the baby turtles and release them into the ocean! Around 55 of the little guys had hatched out today, and were ready to swim for their lives.

Turns out that baby turtles are even cuter than you imagine

Half an hour after we got to Las Playitas, the group of helpers had expanded to a crowd, and volunteers divided us into huddles per bucket of babies. Most were given to family groups to release. We were asked to form an ‘infinite line’ along the beach, and the bucket holders released the turtles onto the sand.

An 'infinite line' of helpers. I'm sure Terry Pratchett had something to say about an infinity of turtles...

If the hatchlings could have survived through will alone, then our infinite line will surely have sent them all to long and happy marine lives. We watched the tiny creatures scramble, crawl and struggle along the sand for what seemed like an infinite amount of time, encouraging them, rooting for them.

Surf would eventually take them away to happy noises from the line, only for half of them to be deposited back on the beach. It was an epic trek for the hatchlings as the sun sank into a spectacular sunset, until they had all been taken by the Pacific, and the darkness.

I like to think again we will meet again someday, under the surface of the clear, blue sea.

Where we stayed: Villa Bugambilias

Cost: US$75 for one night, including local taxes.

Verdict: Friendly, clean and good with balcony and large shower.

Bonus point: It has a pleasant garden area with a frigid pool, which must be a delight in the summer, but which I masochistically decided to brave in 20°C due to my inability to leave any pool alone. I recommend not staying there in the winter if you’re anything like me!